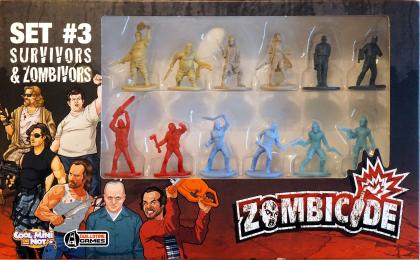 Pack of promo survivors given to backers of the Zombicide Season 2 Kickstarter campaign.

Contains a total of 12 miniatures, survivor and zombivor versions of each of the following characters: Achille the Serial Killer, Chuck Momma's Boy, Mack the Car Salesman, Smith Dog of War, Mike the Miniature Sculptor, and Gary the Misfit.

- Achille is insane, a demented serial killer, and the zombies didn't change this. He would be a danger to any survivor if he hadn't decided to focus his murderous instinct on zombies. He finds being surrounded by potential victims that are actively hunting him terribly exciting. The human mind has nothing left to teach him. The zombie mind, however, even though it seems simpler, has an interesting potential. Well, you have been warned.

- Against all odds, Chuck has managed to survive the rise of the zombies. Living in his parent's basement, this 30 something man child's lack of real world experience hasn't been that much of a disadvantage, since there isn't much of a world anymore. Armed with a deep knowledge of zombie survival lore gleaned off videogames and the internet, Chuck is an unlikely, chubby ally - and possible food source if things get desperate.

- "Gary, master of none", so people used to say. Gary didn't have a solid education and his demeanor seemed too "cool" to find reliable work and live in the mold of everyday people. He was almost a pariah when the apocalypse struck and shattered the "everyday". Don't be fooled by his outfit: for his casual unconsern, Gary has done well on its own so far. Gary has always been a survivor, and the zombies didn't really change his habbits. If you're open-minded enough to see through Gary's disguise, he could trust you and share his precious tools of the trade.

- Mack's story is like most - an ordinary, happy man untill the zombies rose, forced to dig deep or die. His peacefull previous life hid his true potential - unfortunatly it took burying his wife and two daughters to bring it out. Taking a car from his lot, he began a cross country zombicide, eventually joining the motley crew of survivors. Mack's fighting spirit has made him a precious resource for any team, and his manic grin gets even wider the worse the odds are!

- Working with putty and tiny tools, Mike has been cooped up for years in his home studio sculpting miniatures for boardgames and the like. Obsessed with his craft, he didn't notice when his wife left and took his daughter with her, and he didn't notice the zombie apocalypse either! Well, that is, until he had to stab the mailman in the eye with a sculpting pick, and the wandered outside out of curiousity to find out what was going on. Mike now works with the other survivors, although they're a little disturbed by how much joy he seems to take in the fact that actual real zombies are "finally" running around.

- Smith mustered out of the special forces straight into private "security", working all over the world for the highest bidder. Specializing in wetwork and asking no questions, Smith was in town for a contract when all hell broke loose. Fortunatly for him, and unfortunatly for the zombies, he had his arsenal stashed nearby. Though used to working alone, even Smith knows he doesn't have enough bullets to take on the zombie hordes by himself. Forced to cooperate with the other survivors, he's finding it hard on his limited social skills.

Each character has a unique set of gameplay attributes to give you a unique gaming experience.