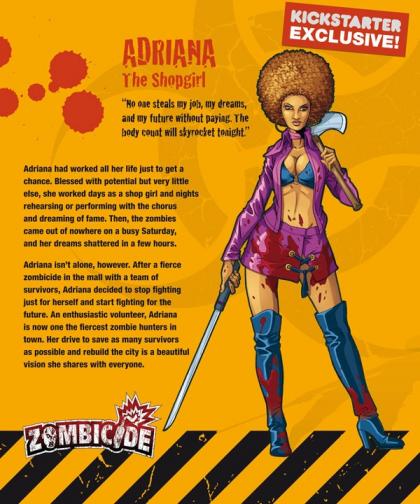 Adriana had worked all her life just to get a chance. Blessed with potential but very little else, she worked days as a shop girl and nights rehearsing or performing with the chorus and dreaming of fame. Then, the zombies came out of nowhere on a busy Saturday and her dreams shattered in a few hours.

Adriana isn't alone, however. After a fierce zombicide in the mall with a team of survivors, Adriana decided to stop fighting just for herself and start fighting for the future. An enthusiastic volunteer, Adriana is now one of the fiercest zombie hunters in town. Her drive to save as many zombie survivors as possible and rebuild the city is a beautiful vision she shares with everyone.

Adriana is an optional promotional survivor available to those that raise an extra amount on their pledge for the Zombicide Season Two Kickstarter campaign. A zombie version (Zombivor) will also be included.