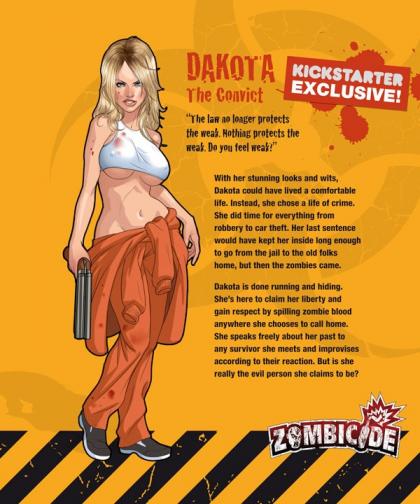 With her stunning looks and wits, Dakota could have lived a comfortable life. Instead, she chose a life of crime. She did time for everything from robbery to car theft. Her last sentence would have kept her inside long enough to go from the jail to the old folks home, but then the zombies came.

Dakota is done running and hiding. She's here to claim her liberty and gain respect by spilling zombie blood anywhere she chooses to call home. She speaks freely about her past to any survivor she meets and improvises according to their reaction. But is she really the evil version she claims to be?

Dakota is an optional promotional survivor available to those that raise an extra amount on their pledge for the Zombicide Season Two Kickstarter campaign. A zombie version (Zombivor) will also be included.