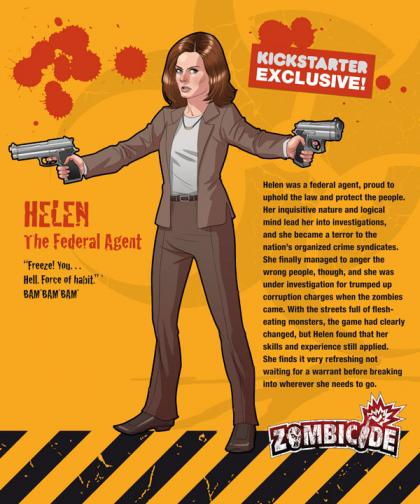 Helen was a federal agent, proud to uphold the law and protect the people. Her inquisitive nature and logical mind lead her into investigations, and she became a terror to the nation's organized crime syndicates. She finally managed to anger the wrong people, though and she was under investigation for trumped up corruption charges when the zombies came. With the streets full of flesh-eating monsters, the game had clearly changed, but Helen found that her skills and experience still applied. She finds it very refreshing not waiting for a warrant before breaking into wherever she needs to go.

Helen is an optional promotional survivor available to those that raise an extra amount on their pledge for the Zombicide Season Two Kickstarter campaign. A zombie version (Zombivor) will also be included.