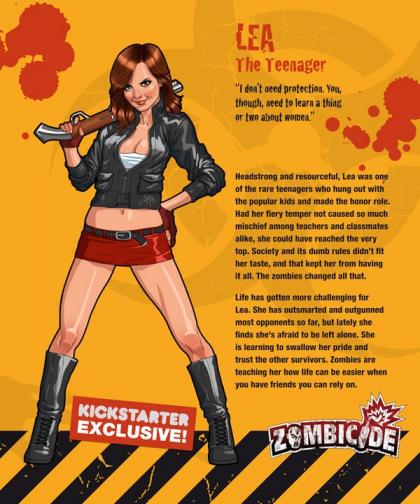 Headstrong and resourceful, Lea was one of the rare teenagers who hung out with the popular kids and made the honor role. Had her fiery temper not caused so much mischief among teachers and classmates alike, she could have reached the very top. Society and its dumb rules didn't fit her taste, and that kept her from having it all. The zombies changed all that.

Life has gotten more challenging for Lea. She has outsmarted and outgunned most opponents so far, but lately she finds she's afraid to be left alone. She is learning to swallow her pride and trust the other survivors. Zombies are teaching her how life can be easier when you have friends you can rely on.

Lea is an optional promotional survivor available to those that raise an extra amount on their pledge for the Zombicide Season Two Kickstarter campaign. A zombie version (Zombivor) will also be included.