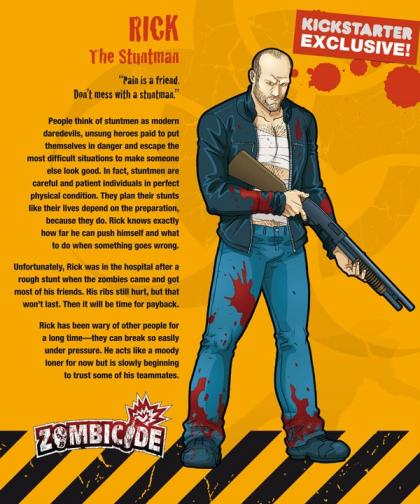 People think of stuntmen as modern daredevils, unsung heroes paid to put themselves in danger and escape the most difficult situations to make someone else look good. In fact, stuntmen are careful and patient individuals in perfect physical condition. They plan their stunts like their lives depend on the preparation, because they do. Rick knows exactly how far he can push himself and what to do when something goes wrong.

Unfortunately, Rick was in the hospital after a rough stunt when the zombies came and got most of his friends. His ribs still hurt, but that won't last. Then it will be time for payback.

Rick has been wary of other people for a long time - they can break so easily under pressure. He acts like a moody loner for now but is slowly beginning to trust some of his teammates.

Rick is an optional promotional survivor available to those that raise an extra amount on their pledge for the Zombicide Season Two Kickstarter campaign. A zombie version (Zombivor) will also be included.