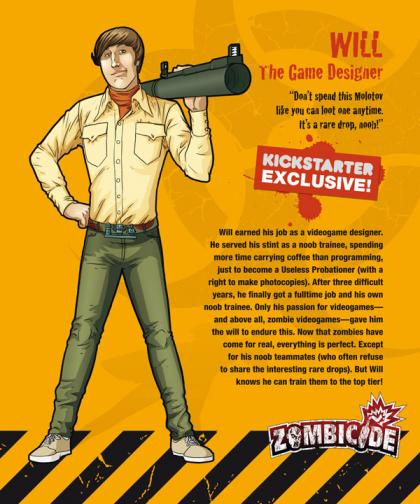 Will earned his job as a videogame designer. He served his stint as a noob trainee, spending more time carrying coffee than programming, just to become a Useless Probationer (with a right to make photocopies). After three difficult years, he finally got a fulltime job and his own noob trainee. Only his passion for videogames- and above all, zombie videogames- gave him the will to endure this. Now that zombies have come for real, everything is perfect. Except for his noob teammates (who often refuse to share the interesting rare drops). But Will knows he can train them to the top tier!

Will is an optional promotional survivor available to those that raise an extra amount on their pledge for the Zombicide Season Two Kickstarter campaign. A zombie version (Zombivor) and an ultrared weapon card will also be included.