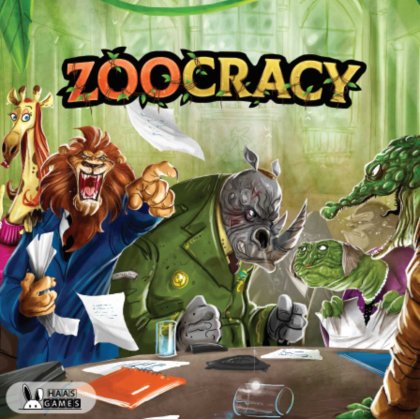 Zoocracy is a highly interactive and language independent political strategy game.&#10;&#10;Each player will lead one of the animal parties using a clever strategy and their best negotiation tactics to make it successful. Trust your animalistic instincts to win elections and hold political offices or plot and pressure the government from the opposition. In the end, whoever has implemented the most political goals, will win.&#10;&#10;Every round there is a parliamentary election campaign where players can spend their food tokens on different animal species to win their votes for the next parliamentary election. The parliament usually gets elected every other round and after that players have to form a coalition with a majority of seats in the parliament. Obviously players with a better election result have an advantage during these negotiations, however it is also possible for weaker parties to form a coalition against stronger ones. The players simply have to agree on how the government offices get distributed and which political goals will be implemented.&#10;&#10;In case the government lost its majority of seats in the parliament, there is also the possibility for the opposition leader to initiate a no-confidence vote against the current government. However to be successful this vote needs a majority of seats as well to elect a new government.&#10;&#10;Moreover there are also presidential election that usually occur every 2 rounds in a direct vote. Here the winners takes it all! The president can also implement a political goal of his party and has some further advantages.&#10;&#10;Finally, some random events may always shake up the situation and force the players to change their plans.&#10;&#10;-description from designer&#10;&#10;