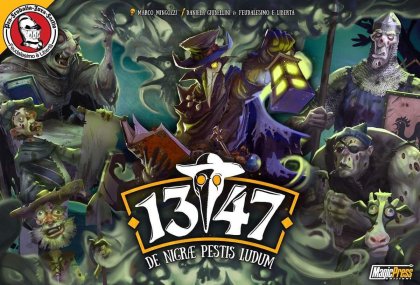 The year of our Lord 1347: The Black Death has arrived via Eastern trade routes, bringing suffering and misery to the towns and countryside. The sole hope for relief from a slow and painful death lies in the hands of the plague doctors. Dressed in black cloaks, and masks stuffed with vinegar-rags and spice, the surgeons roam the Burgus streets searching for the infected. To these they offer salvation, saving their flesh from death, while gaining prestige with the princely court and &mdash; why not? &mdash; one or two shiny coins!&#10;&#10;Will you prove yourselves as valorous surgeons, up to the tasks you're called to resolve? Will you expand your influence with good works, draining infected swamps and building plague hospitals? Or will you give in to the facts of life, and death, raking in whatever coins you happen to find?&#10;&#10;1347 is a strategic game in which players are plague doctors with the aim of gaining as much fame and prestige as possible to become the most important of the town. Each player has resource cards, money, grave diggers, and five influence tokens at their disposal to invest in order to defeat the plague and enrich themselves. There are three stages that will repeat for three periods (that will vary from 6 to 9 game rounds):&#10;&#10;&#10; Investments -&gt; Each player, turn by turn, will invest one influence token (from 0-4 influence points) in one of the six areas of the board, each one with different actions allowed. All the investments are hidden. Investments go on until all players remain with no tokens.&#10; Actions -&gt; Starting from Area 1, all invested tokens are revealed. The player who invested the most is the only one who can exploit the actions allowed from that area. The other players who invested can convert their &quot;unused points&quot; in money or grave diggers. So losing is also a strategy. In case of tie, the first player, or the nearest one in clockwise has priority, in any case the first player will change at the end of each round.&#10; Upkeep -&gt; In this stage players collect money from the Agrus (the country), can heal their recruited plagued commoners, or can maintain their healed commoners. Healed commoners give players new influence tokens to invest and an ability to exploit as long as they remain healed.&#10;&#10;&#10;There are many kind of actions players can do: recruit commoners, transform grave diggers in peasants to collect money, build expansions to enforce their influence to specific areas, etc.&#10;&#10;At the end of the game, the players obtain 1 wealth point (victory points) for:&#10;&#10; Each influence point (the value shown on each influence token held);&#10; Every five coins;&#10; Each subject card;&#10; Each development held;&#10; Every three gravediggers held (including the player's reserve and those assigned to the Agrus).&#10;&#10;&#10;&#10;&#10;&mdash;description from the publisher&#10;&#10;