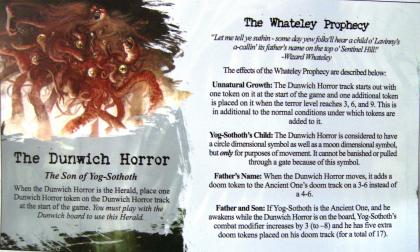 This is an official Herald, published by Fantasy Flight Games (originally only on the website, later also in the Arkham Horror: Miskatonic Horror Expansion), to be used when using the Herald / Guardian mechanic in games of "Arkham Horror".

Unnatural Growth : The Dunwich Horror track starts out with one token on it at the start of the game and one additional token is placed on it when the terror level reaches, 3, 6, and 9. This is in addition to the normal conditions under which tokens are added to it.

Yog-Sothoth's Child : The Dunwich Horror is considered to have a circle dimensional symbol as well as a moon dimensional symbol, but only for purposes of movement. It cannot be banished or pulled through a gate because of this symbol.

Father's Name : When the Dunwich Horror moves, it adds a doom token to the Ancient One's doom track on a 3-6 instead of a 4-6.

Father and Son : If Yog-Sothoth is the Ancient One, and he awakens while the Dunwich Horror is on the board, Yog-Sothoth's combat modifier increases by 3 (to -8) and he has five extra doom tokens placed on his doom track (for a total of 17).