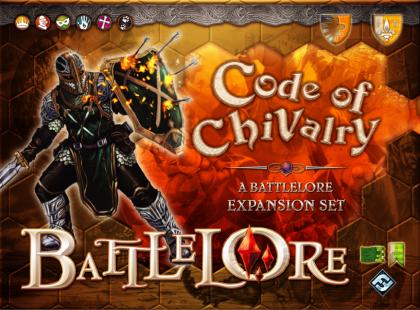 Code of Chivalry is a human Army Pack for BattleLore that lets you swell the ranks of your armies, and it features knights, arbalestiers, and lancers!

Code of Chivalry comes complete with two new unit types as well as two unit types previously released in the Hundred Years War and the Scottish Wars expansions. These units will easily bolster the forces of any Human army, giving players more options during their BattleLore games.

Finally, Code of Chivalry comes with four new adventures to give players a knightly challenge for their new units!

Also included are new Mounted Knight Lancer stickers (from BattleLore: Scottish Wars) as well as enough stickers (marked by a star, 4 each of standard and pennant) to replace the current BattleLore: Scottish Wars banner stickers. (There are 4 standards for the 3 Arbalestier units) Note that cards in this set replace previous cards of the same name.