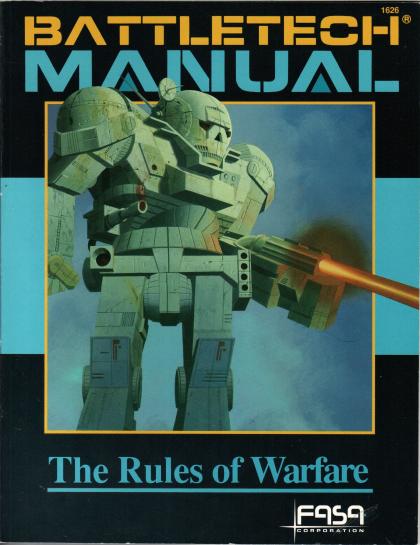 BattleTech Manual: The Rules of Warfare

"As dawn broke over the battlefield...

The helicopters roared over the hill, skimming the tops of friendly 'Mech antennae. Aerospace Fighters carrying heavy bomb loads hunted for the enemy airbase. At 1500 hours, the main 'Mech force moved out. The motorized infantry had pulled out about three hours earlier, and the tanks, both tracked and hover had left an hour ago. At 2000 hours, the hydrofoil assault force skirted the enemy's rear echelon and called for support from the artillery fire base. The battle was joined.

The MechWarrior's most complete and accurate sourcebook.

The BattleTech Manual is a 104 page compilation and expansion of the rules for the BattleTech series of games: BattleTech, CityTech, and AeroTech. Considered the final version for these games, the included rules take precedence over any previous rules.

Some rules have been clarified or slightly modified in this manual.

In addition, this book presents complete generation rules for all vehicles, from BattleMechs to submarines.