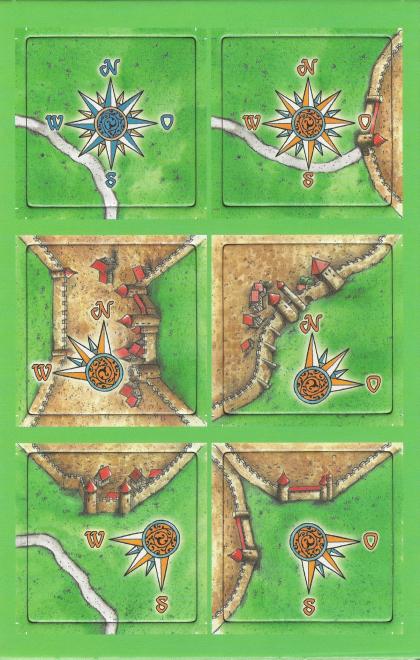 Die Windrosen is a six-tile mini-expansion for Carcassonne. Each tile depicts all or part of a wind rose (AKA compass rose). The red, full wind rose is a new starting tile, and divides the playing area into four fields.

Orange full rose is new start tile and defines the four quarters: SW, SE, NW, NE.
Blue full rose (reg. backside) redefines the four quarters.
Orange quarter rose tiles (reg. backside) are worth 3 bonus points if put down in the corresponding quarter of the playing field, e.g. the South-West rose tile put down in the SW quarter defined by the current valid full wind rose.
Appart from that the roses have no influence on the play and the features on the tiles and other points aquired through the tile.
The blue full and the 4 orange quarter rose tiles are shuffled in the stack at the beginning.