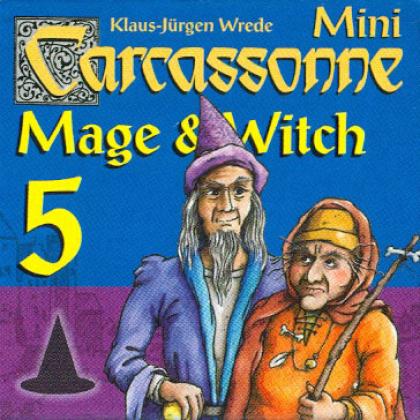 In Carcassonne: Mage & Witch, a small expansion for Carcassonne, eight landscape tiles bearing a mage symbol are mixed with the other tiles at the start of the game.

Whenever a player draws one of these tiles, she plays it as normal following the standard placement rules. She then either places or moves the mage or witch on the playing area; both figures can be placed only on incomplete roads and cities, and both cannot be on the same road or in the same city. The player must place or move one of these figures, if possible. She then optionally places a follower on the tile just played.

Whenever a feature bearing a mage or witch scores, whether during the game or at game's end, the mage/witch adjusts the points scored for this feature. The mage adds one point for each tile in the feature, while the witch cuts the number of points scored for this feature in half, rounded up. After such scoring, place the mage/witch next to the score track to await the drawing of the next mage tile.