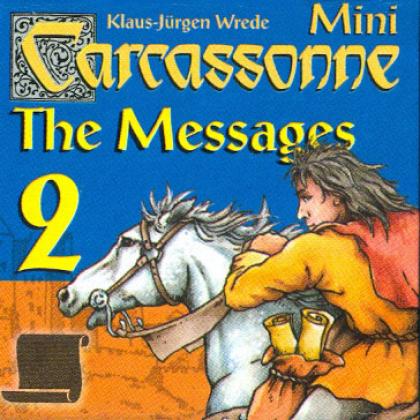 In Carcassonne: The Messengers, a small expansion for Carcassonne, players place a second meeple (included in this expansion) on the score board at the start of the game. Whenever they score points during the game, they decide which scoring meeple to advance; if a meeple lands on one of the dark spaces on the score track (0, 5, 10, etc.) and the owner of that meeple is the active player, then that player draws the top message tile from the track and either scores two points for it or takes the action shown on the tile. The possibilities are:

Whichever option the player chooses, he then places that tile on the bottom of the message stack.

At the end of the game, players add the scores represented by their two scoring meeples, place one meeple on that sum, then figure out their final scoring, earning no more messages.