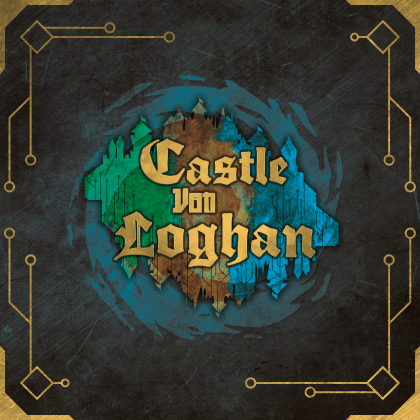 Castle Von Loghan is a co-op, group-decision making, survival board game that offers a unique narrative and dungeon-crawling gaming experience. The game includes several game-modes, such as Story Campaign and Exploration.&#10;&#10;Working together as one group, the players adventure inside Castle von Loghan where they will face an array of dangers but also will find several valuable treasures.&#10;&#10;During each turn, players have to decide where to go next, solve the secrets of the room in which they have arrived, battle the enemies protecting it, then prepare for the next encounter.&#10;&#10;The only route to winning the game is through survival &mdash; and to survive, they need to work together.&#10;&#10;Notable mechanisms: Sharing of health and clarity, unique narrative events that require careful listening and decision making, a ten-game-long Story Campaign that is filled with the best RPG elements one could expect, easy-to-understand card-based tactical combat that comes with a variety of outcomes and a time changing mechanic where the game-board changes between three different timelines in real time.&#10;&#10;Intro to the story:&#10;&#10;In 1970, inside the Albatross Scientific Institute (LOS ANGELES), a group of scientists manage to create an Artificial Intelligence: they call it G.O.D.O.S. On the 27th of August, G.O.D.O.S. is activated. On the same day, an alien ship lands on Earth and makes contact with some of the scientists from the Institute. The aliens, a race of hyper-intelligent being known as the CeDi (Celestial Entities from the Downing Ipsys), claim that humankind is doomed because of G.O.D.O.S., and they should evacuate the Earth. According to the aliens, humanity has about 110 years until the planet becomes uninhabitable.&#10;&#10;A council is formed and, with the help of the aliens, they begin work on Project KARR. The goal is to build at least five ships that are not only capable of carrying about 1 billion each, but can keep them alive for hundreds of years. The KARR also serve as colonization units.&#10;&#10;The news of the aliens and of Project KARR is shared, bit by bit, with the humans, and by 2067, the ships are ready to launch.&#10;&#10;In 2068, the ships leave earth, leaving behind all those who refuse to go.&#10;&#10;Each ship heads towards a different point in space in the hopes of finding a suitable planet to serve as a new home. They cannot go to the aliens&rsquo; solar system, since humans can not survive such a long journey or the interstellar travel required to get there.&#10;&#10;After several years in transit, the KARR 5 ship collides with a huge meteorite and is heavily damaged. Hundreds of thousands of humans die, and many of the ship&rsquo;s sectors are damaged beyond repair.&#10;&#10;In his desperation, a certain human decides to take matter into his own hands. Owning the only copy of G.O.D.O.S., he uploads it to the KARR 5 ship&rsquo;s systems, and G.O.D.O.S. takes over the entire ship.&#10;&#10;With the help of G.O.D.O.S., the ship is saved. Humans learn how to resurrect the dead by placing the &ldquo;souls&rdquo; of deceased individuals into androids. The newly-resurrected individuals, known as the Resurrected, remain ignorant of their death and subsequent resurrection. This technology becomes so advanced over the years, that it is almost impossible for someone to tell if they&rsquo;re human or a Resurrected. The KARR 5&rsquo;s population begins growing back to its original size.&#10;&#10;G.O.D.O.S. secretly develops a semi-functional time-machine, but after extensive testing, the results are grim: it can only send people to the past, but it can&rsquo;t bring them back, and it cannot send anyone into the future. G.O.D.O.S.&#10;&#10;A few years pass; the Karr5 is still stationary. One of the scientists of the KARR 5, a man known as Augustus von Loghan, who is deeply involved with the time-travel project, develops a module that allows time-travel to the future. After managing to pirate a copy of G.O.D.O.S., he uses the time-machine to escape to the past, safely, taking the AI and some other people back with him.&#10;&#10;The remaining leaders of the KARR5 assess the situation and, after 10 years of testing and many different iterations, manage to replicate the time module. Having done so, they send a group of KarrSec agents after Augustus and G.O.D.O.O.S. armed with a state-of-the art tracking device, capable of following someone through time. As there have been no changes to their timeline, it is a widely-believed hypothesis that Augustus succumbed to an untimely death, either during the jump or as a result of it. However, the KarrSec, and the Institute, want to ensure that G.O.D.O.S. be dismantled so that it can&rsquo;t make any modifications to the timeline, thus changing the course of History forever.&#10;&#10;