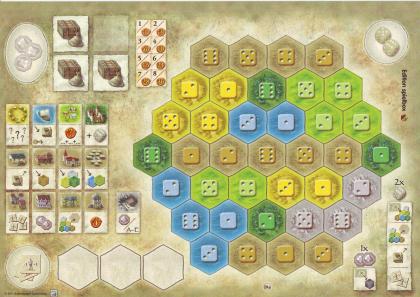 These boards are part of the Spielbox magazine issue 05/2011.

Rules:
In the original game, you have to lay all tiles in the princedom next to at least one already laid-out tile. Now, not only do you have to place them as just described, but in addition, the tiles always need to be connected - directly or indirectly (i.e. by the same color) with at least one castle.

In other words: If you add a new tile, it must lie either directly next to a castle - or at least be connected with a castle by the same color (as the tile); a different color is not allowed.

This rule doesn't apply to new castles; they may be added as before.

At any time, for the cost of both dice actions and 5 victory points, a player may retrieve a previously set-aside (that was unclaimed/purchased from the main board in a previous round) Castle tile (Green or Black-backed) and place it in their reserve.