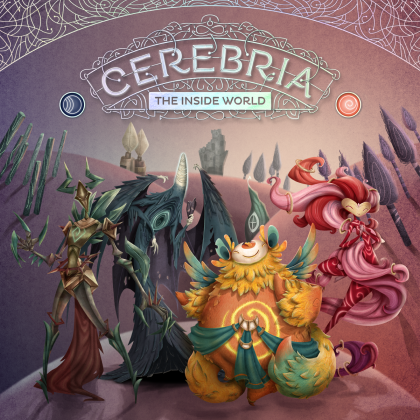 Cerebria: The Inside World

Origin is the infinite source of all that creates Cerebria, the Inside World. Yet nothing can exist forever unnamed and untamed, two opposing forces emerged in Cerebria: Bliss and Gloom, the Shapers, locked in eternal struggle to form the land to their own image. The agents of the Shapers are the Spirits, powerful entities who use the energies of Willpower, provided by Origin. The Spirits invoke Emotions inhabiting Cerebria in their service to gain power over the Five Realms: the Valley of Motives, the Willow of Values, the Network of Thoughts, the Cradle of Senses, and the Land of Desires.&#10;&#10;By increasing their influence over the land, Bliss and Gloom build the Identity, leading it through stages of Revelations. Cerebria is in constant flux, only during a Revelation can the Spirits leave a permanent Fragment on the Identity, an unchangeable mark of Bliss or Gloom. Which side will dominate the Identity, who will establish final control over the Inside World?&#10;&#10;Leave the Outside World behind, submerge into Cerebria and shape the future of the Inside World in a 2-4 player area-control team game Cerebria: The Inside World. Assume the role of Cerebria's Spirits associated with either Bliss or Gloom, and invoke Emotion cards with various intensities and abilities to occupy important areas on the main board.&#10;&#10;The Spirits can perform multiple actions in their turns, such as moving around Cerebria&rsquo;s Realms, invoking, empowering and quelling Emotions. The main source of their actions is Willpower, gained primarily from Origin&rsquo;s Spheres during each Spirit&rsquo;s Meditation, the other one is Fortitude, determining the number of actions they can take. The Spirits use Essence to sustain the Emotions and eventually upgrade some of them to their more powerful alternatives with new, potent abilities.&#10;&#10;The aim of these actions is to build the Identity over the course of the game. The Identity consists of multiple Fragments, belonging to either Bliss or Gloom. These Fragments are added during events called Revelations, and represent the state of the Inside World at the time of that Revelation. These are key moments in the game: Cerebria&rsquo;s state is in constant flux, but the Fragments are permanent imprints of a game state during a Revelation.&#10;&#10;&#10;The game is won by the side with more influence over the fully grown Identity, thus becoming the dominant force in Cerebria.&#10;&#10;&#10;

Voti e commenti per Cerebria: The Inside World