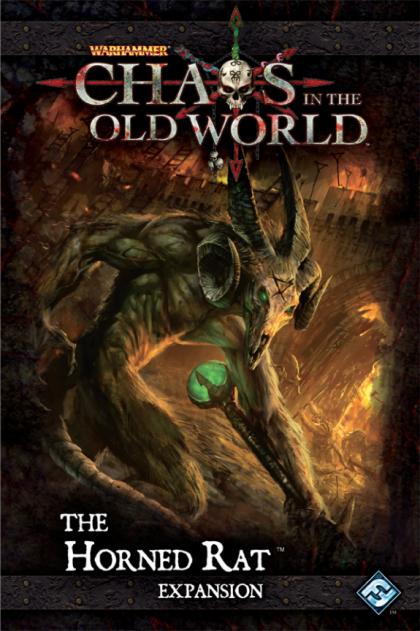 Chaos in the Old World: The Horned Rat Expansion

Below the Old World's cities sprawls a vast network of tunnels, caves, and underground roads. Verminous Skaven skulk within this Under Empire, waiting for the perfect opportunity to rise from the warrens and destroy their enemies for the glory of their sinister god, the enigmatic Horned Rat. Even as the Ruinous Powers work to corrupt the Old World, the Skaven are ever scheming to further their own dark agenda.

The Horned Rat expansion for Chaos in the Old World introduces a fifth player to the race toward corruption! Armed with a legion of Skaven followers, the Horned Rat player uses numbers and subterfuge to his advantage, scoring points by spreading the Skaven's teeming masses across the Old World. Players of the existing Ruinous Powers can meet the foul vermin head on with a host of new gameplay options, including alternate upgrade and Chaos cards. Meanwhile, veterans will find engaging challenges with new expert-level Old World cards and gameplay variants. Prepare to join the battle for dominance!

Voti e commenti per Chaos in the Old World: The Horned Rat Expansion