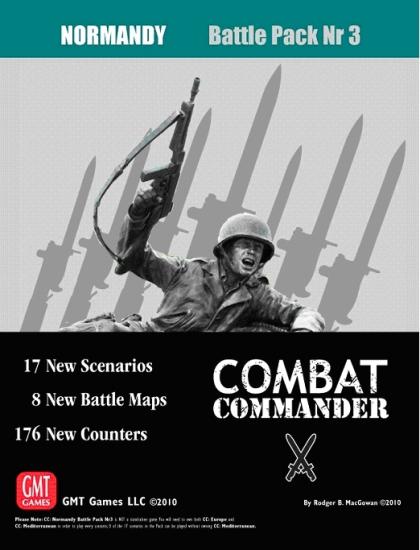 Combat Commander: Battle Pack #3 -- Normandy is the third themed collection of scenarios for use with the Combat Commander: Europe series of games. The theme of this third Battle Pack shifts to the West Front in June, July and August 1944 as various Allied forces landed on French soil to fight the occupying German forces. CC: Normandy features seventeen new scenarios printed on cardstock -- one of which is a multi-scenario Campaign Game -- as well as eight new maps, added markers necessary for some of the scenarios, and a new feature to the series: a majority of the leader counters represent historical individuals who actually fought in the depicted actions.

The maps depict specific locations in Normandy: Pegasus Bridge, Pointe du Hoc, Omaha Beach (one directly on the beach at Widerstandsnest 61 and two on the bluffs above the beach, one on the western cliffs and the other on the eastern flank heading towards Cabourg), the villages of Crisbecq and La Madeleine, and finally Sword Beach (at La Brèche d’Hermanville).

The scenarios in CC: Normandy include:

-- "Mazed and Confused" set in the communication trench network above Omaha Beach, with US Rangers, 6 June 1944;

-- "This Man Was Good" set in the bluffs above Omaha Beach, with a German Counterattack of US Army units, 6 June 1944;

-- "The New Highlanders" set at the village of Authie inland from Juno Beach, with Canadian units, 7 June 1944;

-- "Deeds not Words" set at Battery Crisbecq inland from Utah Beach, with US Army units, 8 June 1944;

-- "East by Northwest" set inland in Brittany, with French SAS Commando and FFI units facing Ostruppen (as represented by conscripts with Georgian and Ukrainian leaders), 18 June 1944;

-- "Graveyard of the North Shores" set near the Carpiquet airfield outside Caen, with Canadian units, 4 July 1944;

-- "Compagnie Scamaroni" set in Caen at night, with a combined force of Canadian engineers and FFI commandos facing Luftwaffe troops at the opening of Operation Atlantic, 18 July 1944;

-- "Cheux’d Up" depicting action at Cheux during Operation Epsom, with Scottish units, 25 July 1944;

-- "Old Hickory Resolute" set at Mortain, with US Army units facing a German assault that was part of Operation Lüttich, 8 August 1944;

-- "Surrender is out of the Question!", set at the infamous Maczuga Hill depicting the brave night defense by the Polish units of the 1st Armoured Division, 20 August 1944;

-- and the "29, Let’s Go!" multi-scenario Campaign Game recreating eight days (11 July through 18 July 1944) of the 116th Regiment of the 29th Infantry Division’s assault on St. Lô; players are encouraged to see whether they can push the 116th Regiment to reach La Madeleine by 15 July (to match the historical scenario above).

(7 of 17 scenarios and the campaign in the Normandy Battle Pack can be played without owning CC:Mediterranean)