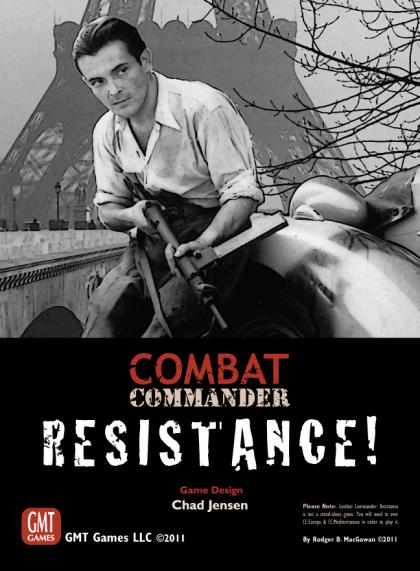 The scenarios included in CC:R are:

62 Bessarabian Nights II is a new version of Scenario 7 originally published in Combat Commander: Europe, set in a German rear area as Soviet forces press German forces back into the Carpathian Mountains, April 1944;
63 Praise the Lord and Pass the Ammunition set in Rouen France with FFI partisans moving quickly and elusively to attack elements of the German 2nd SS Panzer Division looking for a place to rest, 30 August 1944;
64 Predator Becomes Prey, set outside Leskovic, Albania, with ELAS partisans in a prepared ambush against elements of the German 1st Gebirgsjäger Division, whose commander suspecting a ruse changed his attack plans, 27 June 1943;
65 Road Trip set at Cressensac, southern France, with FFI partisan forces ambushing the German 4th SS Panzergrenadier Regimental HQ, 8 June 1944;
66 Those are not Birds set in the Bryansk Forest in Byelorussia, with Soviet partisans of the Orlov Regiment preparing a trap for elements of the German 707th Security Division during Operation Vogelsang, 8 June 1942;
67 The Orient Express set at the south end of the Gorgopotamos Bridge near Lamia, Greece, with ELAS partisans seeking to suppress the Italian Garrison while British Demolition commandos prepare to blow the bridge during Operation Harling, 25 November 1942;
68 Tito’s Trick set at Jablanica, Hercegovina, at the railroad bridge crossing of the Neretva River, with Partisans attempting to seize the bridgehead and destroy the Chetnik forces blocking the Partisan escape from German forces (during the 4th Enemy Offensive), 28 February 1943;
69 Compagnie Scamaroni II is a new version of Scenario 58 originally published in Combat Commander: Normandy, set at night in the Vaucelles neighborhood of Caen just before the Orne River,18 July 1944;
70 Appointment at Daliki set in a remote village south of Lepel, Byelorussia, with Soviet partisans of an important Operative Center suddenly trapped by a well-executed German rear-area clearing operation, 26 June 1943;
71 Valley of the Heroes set outside the village of Tjentište, Eastern Bosnia, at the Sutjeska River, where trapped Partisan units fought their way through a weak point in the German-Croatian lines, escaping once again although at great cost (during the 5th Enemy Offensive), 14 May 1943;
72 Thunderstorm set on the island of Korčula on the Croatian Adriatic coast, with Partisans of the Dalmatian Brigade attempting to buy enough time for their comrades to evacuate from surrounding German units of the 118th Jäger Division (during the 6th Enemy Offensive), 23 December 1943; and
73 No Quarter set at the town cemetery outside Drvar, Western Bosnia, with Partisans of the Lika Division in a ferocious showdown with elements of the 500th SS Fallschirmjäger Battalion after a spectacular but failed attempt to seize Tito in his country HQ (during the 7th Enemy Offensive), 25 May 1944.