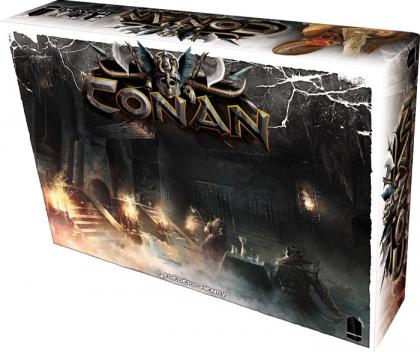 The north wind blows in from the rugged domains north of Conan's homeland. With Asgard to the east and Vanaheim to the west, these two territories compose the frozen tundra that is Nordheim. The men of these lands are toughest of the tough, hardened by cold and battle. Blood spilling across the pristine snow as different tribes fight for supremacy.

Despite the uneasy relationship between the Cimmerians and the Aesirs, Conan earns their respect through strength of arms and embarks on more than one adventure across these glistening lands.

Join Conan and his companions as they cross swords with the Vanirs, pursue the Frost-Giant's daughter, do battle with a necromancer defiling the burial grounds of wars past and more in the Third expansion for Conan.

Featuring scenarios written by Croc, author of Claustrophobia and many roleplaying games, and his son Sippik!