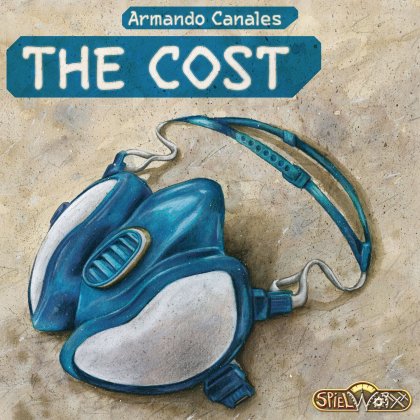 The Cost is a challenging economic board game that places players in the role of a company whose interest is in the asbestos industry around the world. Players compete to make their fortune by concentrating or diversifying in the various aspects of the industry such as mining, refining, and shipping. Whoever ends the game with the most money wins.&#10;&#10;The game is played over four rounds, but it might end early due to health and safety regulations that shut down the industry by eliminating all areas in which they can act. In each round, players begin their turns by selecting a country in which to execute their actions. This selection triggers an event within it, in addition to having an effect on its economy.&#10;&#10;Players then use a unique system to draft three actions at once for the round. These actions can be a mix of building mines, building refineries, gaining government subsidies, establishing railroads, and establishing ports. Once all players have executed their actions, they may convert their money (i.e., victory points) into specific country resources, with each country having its own conversion rate.&#10;&#10;A player's industry then goes into motion with mines producing raw asbestos, refineries refining that asbestos, and railroads and ports transporting these goods around the world. Players may also have a chance to invest in their own companies to gain an edge. When players mine or refine asbestos, they must choose to either maximize profits for short-term gains or sacrifice their hard-won money to minimize deaths, thus sustaining the industry.&#10;&#10;&mdash;description from the publisher&#10;&#10;

Voti e commenti per The Cost