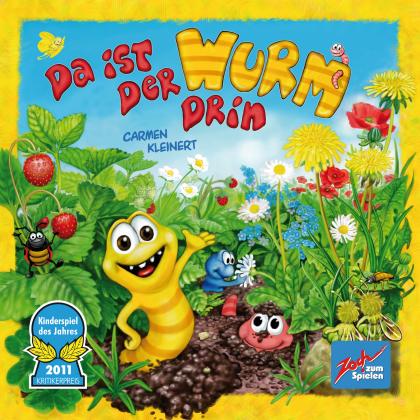 In the dice game Da ist der Wurm drin, players want to be the first to have their worm poke its head out of the compost heap at the end of the garden.

On a turn, a player rolls the die, then places the appropriately colored worm section into the track holding his worm. The worm sections come in six colors and range from 1 cm to 6 cm long. On any turn, a player can place her daisy (or strawberry) tile above the worm that she thinks will reach the daisies (or strawberries) first. If that worm does indeed poke its head into view through the slot before any other, then that player can add the daisy (or strawberry) tile to her own worm. (Choose wrong, and you discard your tile.)

The first worm to poke its head out from under the far edge of the smaller game board wins. For a longer game, players can keep their worms going until one stretches its head off the edge of the larger game board.