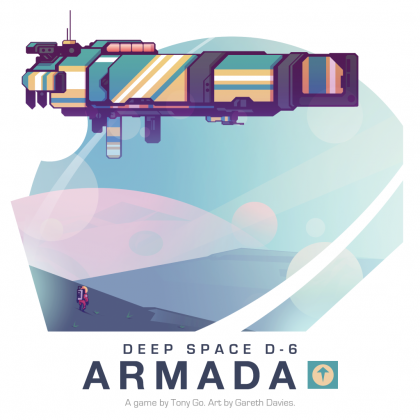 Description from the publisher:&#10;&#10;Deep Space D-6: Armada is the standalone multiplayer sequel to the award winning solitaire game Deep Space D-6.&#10;&#10;In the far reaches of the galaxy, a small mining colony is discovered to contain the last known deposits of Tau Zero, a rare component used in manufacturing powerful Zero Drives. Now it has become the target of bandits and pirates from all across the verse.&#10;&#10;Answering the call for protection, an unlikely band of mercenary starship captains must work together to defend the colony. Forming an armada at the edge of space, these captains will have to trust each other as they fight off hostile ships and deal with internal threats including hull breaches and system malfunctions.&#10;&#10;Each player will take command of a mercenary starship with unique starting stations and basic crew. You'll be able to complete side missions and salvage wreckages in order to upgrade your ship. Additionally, with enough fame and reputation, you'll recruit new crew members, including famous heroes and former rogues.&#10;&#10;Players will roll crew dice and assign them to their ship's stations in order to perform actions. Each crew member provides varying skills and abilities. All of your ship's actions including movement, combat and support, are performed by assigning crew.&#10;&#10;Will you survive long enough for the United Earths Federation to arrive?&#10;&#10;DSD6: Armada takes the gameplay of Deep Space D-6 and enhances it with ship upgrades, mission structure, and hidden roles- all while retaining the game's signature minimalist style. DSD6: Armada is not an expansion and does not require Deep Space D-6 to play.&#10;&#10;