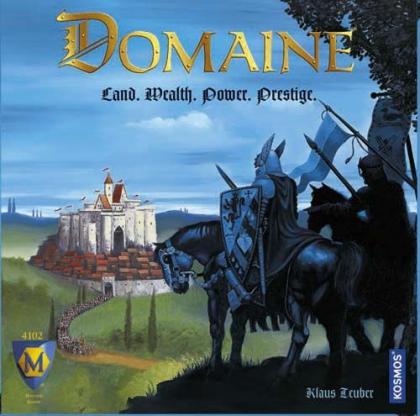 The king shall return... But before he does, the realm falls into anarchy and chaos. The lords of the kingdom struggle to improve their place and standing. New borders are drawn, and expanded through strength of arms and subtle maneuver. Each duke seeks to establish a claim over the most valuable parts of the kingdom before the king finally returns. In the dark of the Middle Ages, control of the land was the key to wealth and power. Can you control enough territory to become the most prestigious duke before the king’s return?

Actions are taken by playing cards that have a cost associated with them. Gain money by selling cards and controlling mines. Sold cards can be acquired by other players.

Players score points based on the quantity and type of terrain enclosed in their domaines, as well as by controlling many mines of a single type. The winner is the first player to cross a specific point threshold or the player with the most points when the card deck runs out.