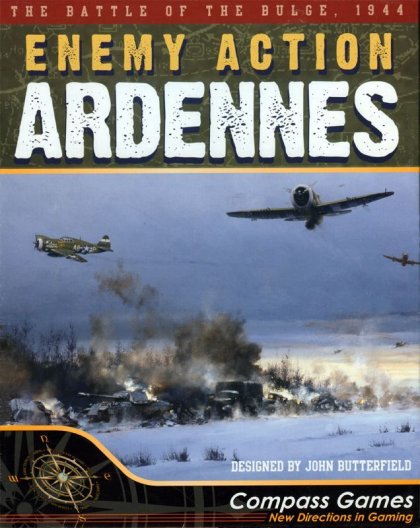 Publisher's advertisement:&#10;&#10;&quot;Enemy Action: Ardennes is the first in a series of card-driven war games on pivotal operations and campaigns in World War II, from John Butterfield, designer of RAF, D-Day at Omaha Beach, Ambush! and Hell&#226;&#128;&#153;s Highway. Each game in the series allows for play by two players or one player, playing either side in the conflict.&#10;&#10;&quot;Enemy Action delivers fun, tense wargaming with a focus on command and capabilities:&#10;- Low complexity with constant decision points for both sides;&#10;- Two-player competition;&#10;- Solitaire play of either side with an innovative system governing enemy command and tactics;&#10;- Card-driven impulse system, with multi-purpose cards that can be played to activate formations, implement command events, or gain tactical advantages in combat.&#10;- Diceless and chartless combat system &ndash; players draw combat chits that build a narrative of each combat.&#10;&#10;&quot;EA: Ardennes portrays the German offensive against the western Allies in December 1944 -- the Battle of the Bulge. Each player controls the German or Allied (US and British) side. If playing solo, the game system controls the other side.&#10;- Map scale: 2.5 miles per hex. Hexes are oversized for easy counter handling.&#10;- Unit Scale: Regiments, brigades and divisions&#10;- Time scale: One day per turn, with several impulses in each turn.&quot;&#10;&#10;BGG wiki page with many clarifications and hints and errata:&#10;Enemy Action: Ardennes German Solo FAQ&#10;&#10;