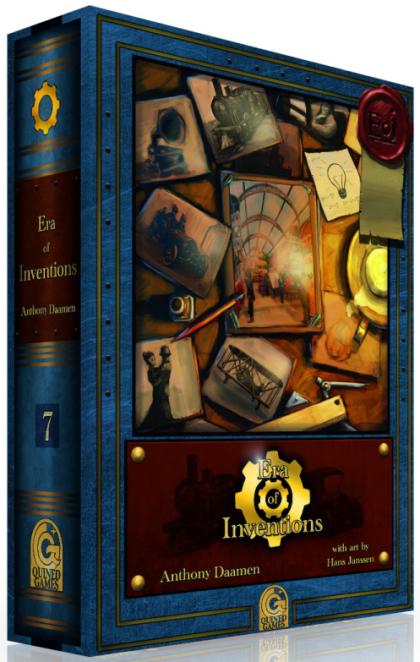 From rules:
Explore the lives and minds of Alexander Graham Bell, Karl Benz, the Wright brothers and other pioneers of invention and experience the thrill of the industrial revolution. Be there when the cash register, the sewing machine, the typewriter, the telephone, the gramophone, the photograph camera, the car, the steam engine and the plane are all invented again in Era of Inventions. This time you will be the inventor, who creates, patents and introduces these inventions to the markets and the world! In the late 19th and early 20th century, these inventions were all made in a certain order. In Era of Inventions, however, you’re the one who determines the order of the inventions. Race your competitors to invent as much as possible, or to speed through the production process. But don’t forget to register your patents. Otherwise you may lose influence in the industry.

GAME OVERVIEW
Era of inventions is played over 8, 9 or 10 rounds –depending on the number of players–. In each round players attempt, by using action tokens, to use the following actions at the wisest, such as: building factories, buying or producing goods, and making and producing new inventions. The number of action tokens is limited however(the time is short), and thus you must choose the best of many actions, given your situation. The player who uses his actions, money, goods and development points at the best will earn the most influence in the Era of Inventions and win the game!