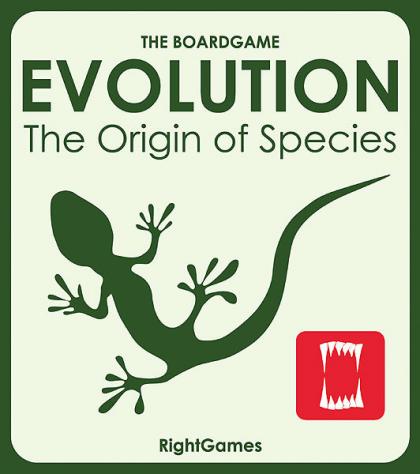 Evolution: The Origin of Species

In Evolution: The Origin of Species, players do the work of nature, putting animals into play and evolving them trait by trait to help them survive and thrive. Each player starts with a hand of six cards that feature an animal on the back and one or two traits on the front.

Each round consists of four phases. During Development, players take turns playing one card from their hand either as an animal (face-down) or as a trait on one of their existing animals (face-up and tucked under the animal). Traits include Carnivorous, Camouflage, Sharp Vision, Swimming, Poisonous and Communication; if a card has two traits, the player chooses which trait the animal acquires, hiding the other trait under the animal. Once a player passes during this phase, he can no longer play cards.

During Food Bank Determination, a player rolls 1-2 dice (possibly adding two to the total) to determine the amount of food available for the round.

During Feeding, players take turns acquiring one food cube and "feeding" one of their animals. Some traits give animals special abilities that can be used during Feeding or at other points during the game. Animals can also be carnivorous, allowing them to attack one other animal to feed – although that animal might have a defense like High Body Weight or Tail Loss that allows it to survive. An animal can't take more food than it needs unless it has fat tissue, which allows it to store food for future rounds.

During Extinction and Draw, any animal not fully fed dies; the owner takes that animal and all traits and stacks them in his personal discard pile. Each player then receives new cards in hand equal to one plus the number of live animals that player has.

When the deck runs out, the players conduct one final round, then score points. Each live animal is worth 2 VP, and each trait on a live animal worth 1 VP; some traits (Carnivorous and Parasite) provide bonus VPs, but make it tougher to keep an animal alive. The player with the most VPs wins.

By combining two sets of Evolution, you can have up to eight players in a game.

Voti e commenti per Evolution: The Origin of Species