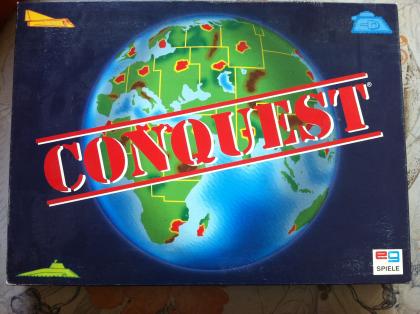 In this game by Editrice Giochi, players use cards to build up armies with production points. The actual gameplay is similar to Risk, with players taking it in turns to produce units, move them and then perform combat by rolling dice. The twist, and the major way in which it differs from Risk, is in the different unit types.
Land, Sea and Air forces may all be built, with differing movement and combat abilities. For example, air units move further and determine first firer in combat, but cost more to build.
In short, I would describe this game as "Risk with attitude", and is definitely preferable to normal risk. It is less luck-based, due to special dice used for combat.