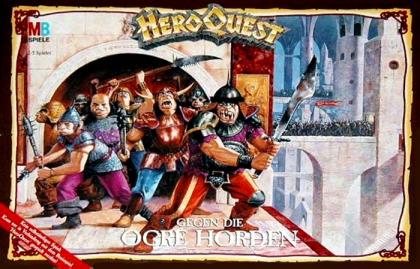 HeroQuest: Against the Ogre Horde

Ogres see the world as one long series of meals: enemies mean lunch or breakfast. Depending on the time of day. More often than not, Ogre duels are vast eating competitions. Although violent brawls make a good substitute. As enemies, Ogres are ruthless foes who show no mercy once their appetite has been whetted. Anyone brave enough to do battle with Ogres must be sure of their own fighting prowess. Otherwise, they might not end up just dead, they’ll end up as someone’s dinner! Ogres are not evil as such. Just permanently hungry and frighteningly violent. Often they just wander about alone. At other times they group together in clans led by an Ogre Lord, also known as a Tyrant. These are some of the meanest, nastiest and hungriest of all Ogres. It is possible for both the Empire and the forces of Chaos to hire Ogres as mercenaries, so long as they are guaranteed a good time, a brawl and plenty to eat (usually as a result of the fighting). But their habits make them unpredictable and horribly dangerous.

Voti e commenti per HeroQuest: Against the Ogre Horde