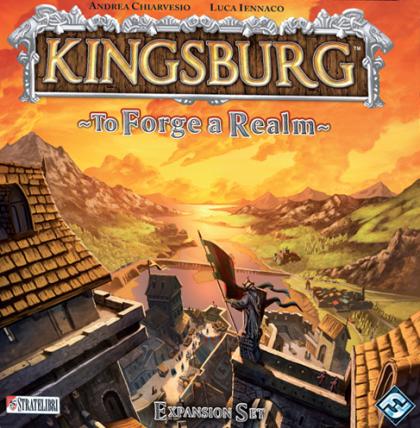 Kingsburg: To Forge a Realm

The expansion is composed by five "modules". One or more modules can be added to the game in order to customize it to your liking (or to have a slightly different challenge each time).
They are:

two extra rows of buildings
seven "alternative rows" of buildings (each replacing one of the seven standard ones; each player gets two of these during setup and thus has a slightly different board than the others to manage)
more than twenty Characters (each one with a special ability; every player gets one of them and enjoys his/her special power for the whole game)
more than twenty Events (they are shuffled and one is revealed at the start of each year, producing a special effect for that year only, which may be helpful, neutral or detrimental, but it's always applied to all players)
an alternative (deterministic) way to handle wintry reinforcements (rather than the die, each player gets six tokens numbered 0, 1, 1, 2, 3 and 4 during setup; at the beginning of each Winter you use and discard a token to get that many extra soldiers from the King).

Voti e commenti per Kingsburg: To Forge a Realm