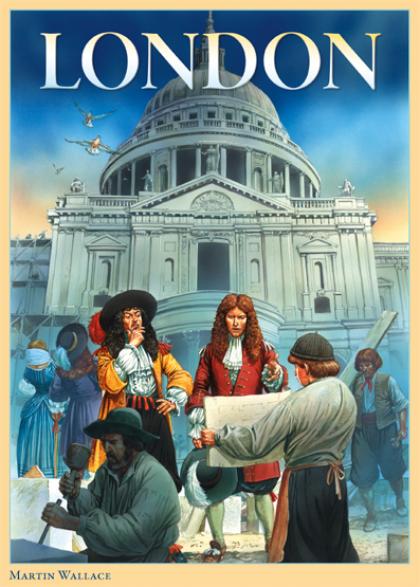 (Inspired by the history of the city from just after the Great Fire until 1900, the game has evolved since the description originally listed on the Treefrog website).

London is a 2-4 player game with a playing time of aproximately 90 minutes. Players select cards with varying powers of cashflow, victory points, and poverty penalties, and compete to manage them most efficiently.

"London lies devastated after the Great Fire of 1666. This is your opportunity to build a new city on the ashes of the old. It is up to you how you employ the talents of the people of London to this end. Will you favour the business classes, who will earn you money? Or would you prefer to spend more money than you can rightly afford on grand monuments and sumptuous palaces? You must also deal with the problem of rising poverty and how to employ the many paupers of the city. Throughout the game you will be forced to make tough decisions. To achieve one aim you must sacrifice another, which may open an opportunity for a competitor."

Nearly 250 years of progress is glimpsed in this game. Famous buildings and monuments of the era as well as engineering developments such as streetlights are illustrated on the cards.

The publisher calls London "a relatively simple game that can be played easily within ninety minutes."

Description below is quoted from Kris Hall's BGN interview with Martin Wallace:
http://www.boardgamenews.com/index.php/boardgamenews/comment...
(Note: Some elements of the game described below have changed as shown in the final rulebook available online)

As with a lot of games, London is about scoring the most VPs. Players manage their hand, selecting cards to play into their building display by laying them out in a line. At some point a player will choose to run his city. They can activate their buildings in whatever order they prefer. The resulting actions can generate money and VPs, reduce poverty or have some other effect specified on the card. Some cards have an entry cost which must be paid before the action can be performed.