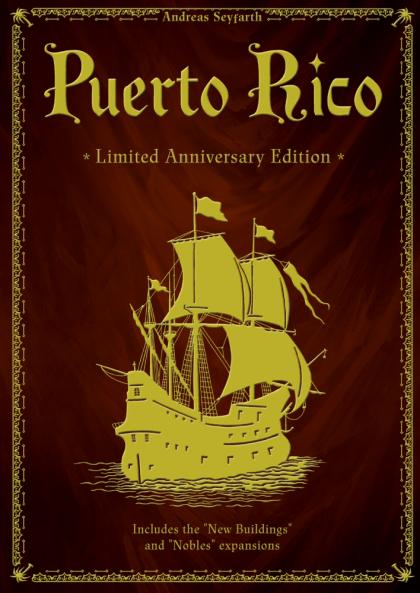 Game play is the same as the original Puerto Rico game: The players are plantation owners in the days when ships had sails. By growing up to five different kind of crops – corn, indigo, sugar, tobacco, and coffee – they try to run their business more efficiently than their close competitors: growing crops and storing them efficiently, developing San Juan with useful buildings, deploying their colonists to best effect, selling crops at the right time, and, most importantly, shipping their goods back to Europe for maximum benefit.

The game system lets players choose the order of the phases in each turn by allowing each player to choose a role from those remaining when it is his turn. No role can be selected twice in the same round. The player who ends up with the most victory points – achieved by shipping goods and building – wins the game.

The game has completely redesigned components and artwork: The cardboard doubloons are now sixty metal coins, while the fifty octagonal resources have been replaced with colored wooden crates. The building tiles are now illustrated, and the cardboard for those tiles and other components are nearly 3 mm thick to give the bits more heft. The individual player boards, the VP tokens, the ships and other components have also been redesigned.