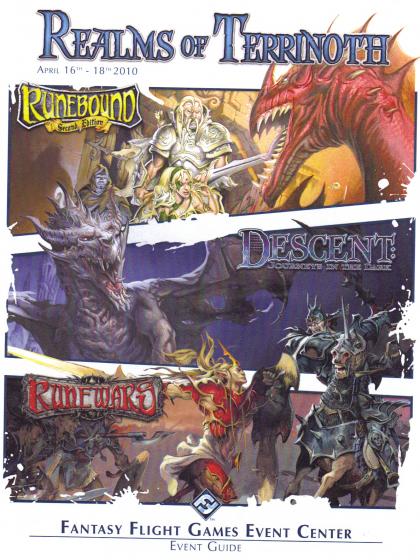 At the Fantasy Flight Games event center, they held an event titled "The Realms of Terrinoth Event" which was a collection of gaming events for Descent, Runebound, and Runewars.
As a promo item handed out to attendees, they received this 24-page booklet which is a Scenario Guide promo for Descent and Runewars.

Inside are three scenarios for Descent and one for Runewars.

1 : Snitty State of the Invincible Overlords

This quest pits one overlord against another -- Red versus Blue -- in a low stakes battle of dungeon mastery. Requires only the base game of Descent Journeys in the Dark to play.

This is a double-overlord race game between two players, or two teams of players. Each side takes a turn being overlord over the opposing side, trying to do their best to make sure their heroes reach the inner guildhall sanctum first.

This is a standard scenario, like all others. This quest uses the outdoor map tiles, therefore the base game of Descent Journeys in the Dark and Road to Legend are required.

This quest involves two teams of heroes attempting to outdo one another by taking the most gold and treasure from the Ice Wyrm's lair. This quest requires both Descent Journeys in the Dark and Tomb of Ice to play.

Two teams of two players each, form up as a Knight and a Squire. The Overlord can kill the squire of each team multiple times, but if ever the Knight goes down, it's game over. It's a race to stay alive and bank more treasure than your opposing team.

1 : Battle of the Ru Steppes