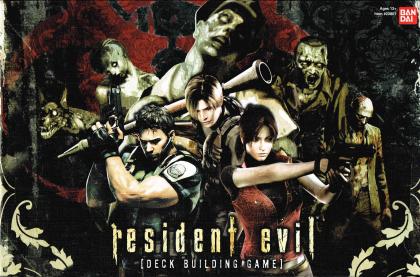 In Resident Evil, a deadly virus has caused the dead to rise and infect any living thing they encounter! Fleeing to a mysterious mansion, you must gather any materials you can find to protect yourself and fight for your survival against a legion of infected beings!

The Resident Evil DBG brings the story to life in a game of strategy where players construct their card decks while they play. Choose one of your favorite characters from Resident Evil such as: Chris Redfield, Jill Valentine, or Albert Wesker among others. Players start with only the most basic of items and weapons. As the game progresses, players build their arsenal with additional Weapons, Ammunition, Action or Item cards to customize their deck and improve their ability in defeating the Infected! Your deck will be your lifeline to survival. How will you survive the zombie outbreak?

The Resident Evil DBG will consist of 250 playing cards, 3 different game modes (Story, Mercenary and Versus) and hundreds of possible scenarios within each mode for unlimited replay value. No two games will ever be the same!

Story mode is the main version of the game where players must race to claim the best weapons, items, and ammunition before others get to it first. Quick thinking and a good instinct will help you survive the Mansion and be the one to escape to safety.
Mercenary mode is similar to Story mode but this mode rewards the players that take the offensive. Players must prove their skills by defeating as many zombies as they can in a limited amount of time. This mode can be played in teams.
Versus mode removes the Infected from the game and pits the human characters against each other in a battle for dominance. Players must watch their back as they attempt to defeat each other while staying alive themselves. Watch out because you may find that players are not as merciful as the Infected!

Players take on the role of one of the Heroes of Resident Evil. They start with a deck of 10 cards, which consist of Weapons and Ammo. Players must use their resources to obtain more powerful Weapons, Ammo, Items, and Action Cards that they add to their deck. As you progress in the game your Deck will become stronger and more efficient. You must use the cards in your deck to fight the "Infected" creatures which awards you Decorations . To win the game you must defeat more "Infected" creatures then your opponents, but the game only ends when the strongest "Infected" creatures is killed. Once he is killed, the player that has gained the most Decorations wins the game.

Ammo cards are used to power your Weapons as well as purchase new cards.
Weapon cards are used to battle the "Infected" creatures. Stronger weapons require more ammo.
Item cards allow you to strengthen and Heal your Character.
Action cards give you additional actions that you can take during your turn, such as drawing more cards or improving the power of your weapons.