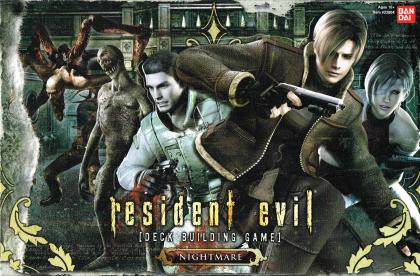 An expansion set that can only be played with either the first Resident Evil DBG or Resident Evil: Alliance. New cards such as Luis Sera, Sergei Vladimir, Mine Thrower will help add to the excitement of the four existing Modes of play: STORY, VS., MERCENARY and OUTBREAK. However, the nightmare is only beginning when the Infected Osmund Saddler makes his appearance!

Card Dividers
Game Manual
150 cards
In addition, RE : Nightmare Box can store the cards from all four first sets