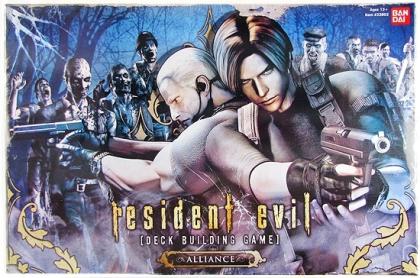 In Resident Evil, a deadly virus has caused the dead to rise and infect any living thing they encounter! Fleeing to a mysterious mansion, you must gather any materials you can find to protect yourself and fight for your survival against a legion of infected beings!

The Resident Evil Deck Building Game brings the story to life in a game of strategy where players construct their cards decks while they play. Choose one of your favorite characters from Resident Evil such as: Chris Redfield, Jill Valentine, or Albert Wesker among others. Players start with only the most basic of items and weapons. As the game progresses, players build their arsenal with additional Weapons, Ammunition, Action or Item cards to customize their deck and improve their ability in defeating 'the Infected'! Your deck will be your lifeline to survival. How will you survive the zombie outbreak?

Resident Evil DBG: Alliance is a stand-alone expansion that can be played on its own or with the top selling Resident Evil Deck Building Game. Play with new additional Characters such as Hunk, Carlos Oliveira, Steve Burnside, Josh Stone or Billy Coen. New Weapons, Actions and Infected have been added to this set to create even more powerful combinations and dangers. Alliance also introduces the new partner mode of play where you take on the mansion with not just one character but two!