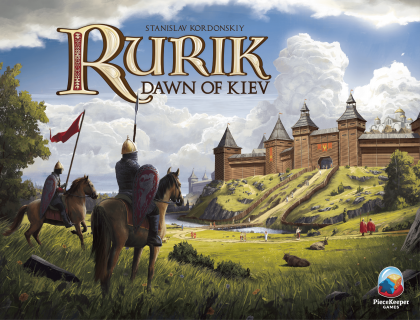 Rurik: Dawn of Kiev is a euro-style realm building game set in an 11th century Eastern European Kingdom. It features area control, resource management, and a new game mechanic - &quot;auction programming.&quot;&#10;&#10;You play as a potential successor to the throne following the death of your father, Vladimir the Great, in 1015. The people value a well-rounded leader, so you must establish your legacy by building, taxing, fighting, and accomplishing great deeds. Will you win over the hearts of the people to become the next ruler of Kievan Rus?&#10;&#10;Rurik brings to life the ancient culture of Kievan Rus with game design by Russian designer Stanislav Kordonskiy and illustrations by Ukrainian artist Yaroslav Radeckyi.&#10;&#10;In Rurik, players openly bid for actions with their advisors. Stronger advisors earn greater benefits at the cost of performing their action later than other players. Conversely, weaker advisors earn lesser benefits but perform their action quickly. This planning mechanism (&quot;auction programming&quot;) adds a fun tension to the game.&#10;&#10;&mdash;description from the publisher&#10;&#10;