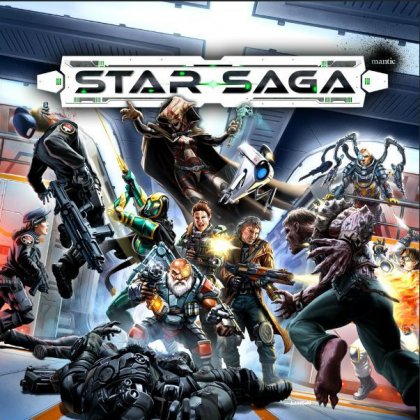 Set in Mantic&rsquo;s Warpath Universe, Star Saga is a science fiction dungeon crawler for 1-5 players, with optional rules for solo play and co-operative play.&#10;&#10;In multiplayer, one player becomes the Nexus Player, who is responsible for controlling the actions of the minions and bosses in the dungeon, all represented by coloured plastic 28mm miniatures. While up to four other players take on the role of mercenaries, again represented by detailed 28mm miniatures.&#10;&#10;The mercenaries are controlled alternately and move around a grid-based sci-fi dungeon complete with computer terminals, narrow corridors and storage lockers to search for new equipment, which can then be used to upgrade the characters' abilities.&#10;&#10;Combat features an opposed dice roll between the Nexus Player and the Mercenaries using custom dice. The game features a number of different story-led scenarios detailing the exploits of the mercenaries as they venture deeper into the dungeon.&#10;There are so many variations of the game!..its extremely moddable.and can easily use the Security guards/marines as the main force against..whatever.instead of the heroes...so quite easy to make Aliens&quot; type missions !!...this is one of those &quot;under the radar&quot; gems that get missed.&#10;&#10;