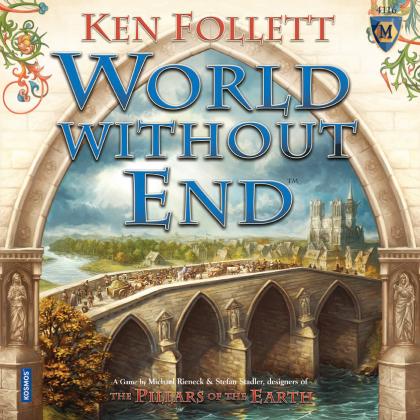 Die Tore der Welt / World Without End is based on the novel by Ken Follett, a sequel to his bestselling The Pillars of the Earth. This is the 2009 game in the Kosmos line of literature-based games.

World Without End shares the Kingsbridge location of the earlier novel, but occurs 200 years later. Similarly, the game shares many themes but is a new standalone game.

As citizens of Kingsbridge, players need to take care of the following areas: Building, Trading, Religion, Feeding, and Medical Knowledge. Each turn an event card is flipped that defines available player actions. Victory points can be won in numerous ways, e.g. by creating buildings or taking care of sick people.