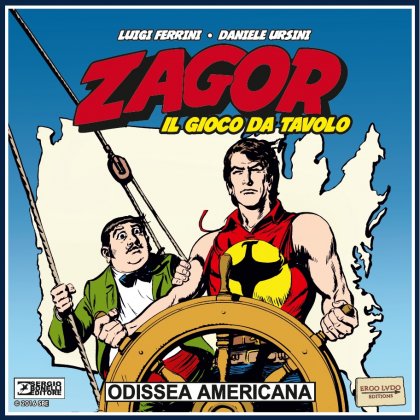 Descrizione tratta da Boardgamegeek:
Exploration semi-cooperative game based on the Italian comic Zagor, in particular on the famous story Odissea Americana (American Odyssey). A rich and bizarre poet hires the crew of the vessel Athena to descend uncharted river and write "the new Odyssey." Zagor and Cico join the expedition, which will prove to be fraught with dangers. At the start of the game all the players will have to choose a character from five available, but Zagor and his companion Cico aren't available, because they are neutral and used by all the players using the appropriate action. Every character is different: the character sheet shows the life points and the respective movement (i.e. losing health also limited the moving ability on the map), special actions available (all different), the combat value and the backpack space (to hold objects and treasures). Each turn begins by throwing dice as many life points of the characters available in the game, including Zagor and Cico. However, the dice of the two "neutral" characters have their own specific color. All players can choose to take and use a "character" die to perform an action with them or choose a Zagor/Cico die to move and perform the action respectively with the hero or his comic relief. At the end of the game the winner is who have made the most victory points, but if the boat sinks without reaching the pier at the end of the map, everyone loses.
Traduzioni titolo gioco:
Editori gioco:
Ergo Ludo Editions
Artisti gioco:
Gallieno FerriMichele RubiniWalter Venturi
Versioni:
Italian edition
ID su Boardgamegeek:
209423