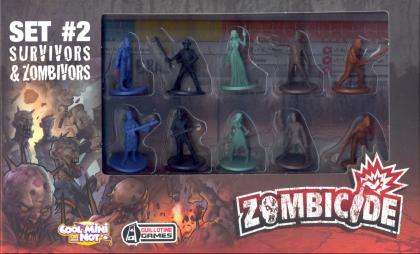 This pack contains Survivor and Zombivor miniatures for Brad The Crime Lord, Thaissa The Entrepreneur, Kirk The Old Sensei, Rose The Aunt, and Ralph The Cowboy, and their respective character cards. These characters were available as free Kickstarter reward for everyone who backed the Zombicide Season 2 Kickstarter campaign at funding levels of $100 or above.

Kirk gained some fame twenty years ago, when learning martial arts was considered cool, and he was the best teacher in town. That respect faded over time as people found for new idols among the rich and famous. Kirk became a nobody and nearly abandoned his passion. Wealth and fame are useless against zombies, however, and Kirk surprised himself upon discovering he hadn't lost his skills. Sure, he's older now, but he will find his form again soon, as his abilities are in high demand again.

After a successful investment, Ralph earned enough money to buy a quiet ranch and retire. When he heard zombies had come from the city to invade the country, he fortified his house and armed his family to face anything. He was about to let the whole damn world burn when his conscience tickled his mind. He had to go back to the city, find his former friends, and save their butts. The situation is even worse than he expected, but so far, wilderness lessons apply very well to urban survival.

Rose was your ideal loving, caring, cooking, loveable aunt, always smiling and giving out wise words to the whole family. Some people, however, started to worry for her after one or two memory lapses. They were wrong to underestimate Aunt Rose. When the zombies came, she was horrified at first but adapted to the situation faster than many younglings. Sure, there is blood and mayhem, and sure, she sometimes forgets her reading glasses in the fridge, but Rose has found a brand new family of survivors to care for.

Thaissa was a successful entrepreneur when the zombies came and tried to change the deal. She kept her cool and slightly altered her terms of service to fit the situation. Thaissa now grows her network among local survivors, dealing in equipment, information, and weapons. Of course, her beauty and unusual attire help a lot. After all, a new world means new possibilities.

From his very youth, Brad could not live by the rules and wish he was born in the wild west. Refraining anyone’s potential has always been anathema for him. So he became a mobster and climbed the crime ladder, eventually becoming a crime lord until he was betrayed and sent in jail. Brad allied with the prison director when apocalypse came and they escaped together. Now Brad is free in a world that doesn’t have rules anymore...just like the wild west!