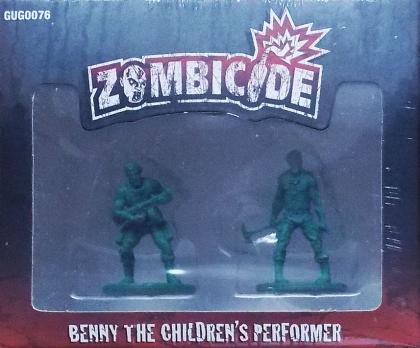 Benny - The Children's Performer
"And now, boys and girls, let's give a big hand to Benny the Bear!"

Needing beer money, Benny answered an ad from a company specializing in children's parties. A star was born that day. a born thespian, Benny's repertoire included a bear, a knight, a giant, a talking zebra, and a friendly commando. He was at a children's party dressed as Captain Jack Action, the star of a popular children's TV show, when the zombies came. Benny's gun was a toy but like all great performers he improvised, fleeing the scene. He wears the costume to keep people from screwing with him and his acting skills make him much in demand amongst survivor groups...for awhile.

Benny is a promotional Survivor that was available to those that pledged extra during the Season 3 Kickstarter campaign. A Zombivor version is also included.