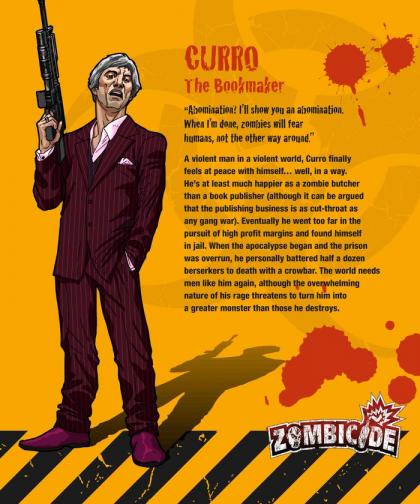 Curro - The Bookmaker
"Abomination? I'll show you an abomination. When I'm done, zombies will fear humans, not the other way around."

A violent man in a violent world, Curro finally feels at peace with himself... well, in a way. He's at least much happier as a zombie butcher than a book publisher (although it can be argued that the publishing business is as cut-throat as any gang war). Eventually he went too far in the pursuit of high profit margins and found himself in jail. When the apocalypse began and the prison was overrun, he personally battered half a dozen berserkers to death with a crowbar. The world needs men like him again, although the overwhelming nature of his rage threatens to turn him into a greater monster than those he destroys.

Benny is a promotional Survivor that was available to those that pledged extra during the Season 3 Kickstarter campaign. A Zombivor version is also included.