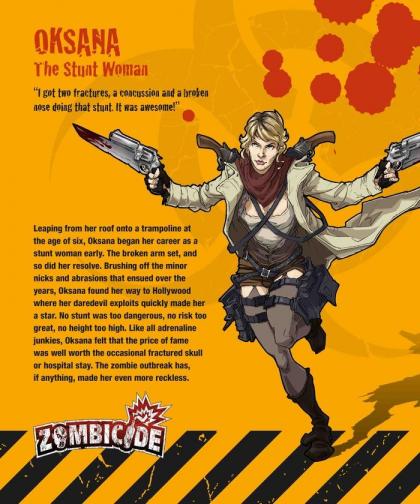 Oksana - The Stunt Woman
"I got two fractures, a concussion and a broken nose doing that stunt. It was awesome!"

Leaping from her roof onto a trampoline at the age of six, Oksana began her career as a stunt woman early. The broken arm set, and so did her resolve. Brushing off the minor nicks and abrasions that ensued over the years, Oksana found her way to Hollywood where her daredevil exploits quickly made her a star. No stunt was too dangerous, no risk too great, no height too high. Like all adrenaline junkies, Oksana felt that the price of fame was well worth the occasional fractured skull or hospital stay. The zombie outbreak has, if anything, made her even more reckless.

Oksana is a promotional Survivor that was available to those that pledged extra during the Season 3 Kickstarter campaign. A Zombivor version is also included.