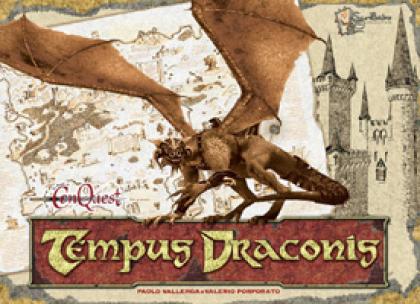 Tempus Draconis is a Boardgame for 2-8 players. Is the second Episode of The Sagas of ConQuest. The Sagas of Conquest (First edition 2001) was chosen Italian Game of the Year 2001 in LuccaGames, the most distinguished Games Fair in Italy. In the same year was chosen best Independent Production 2001 in Acquicomics Fair.
Note: Tempus Draconis is the Multilingual edition of Millenarocca (Italian boardgame 2003); But this version have some better changes in the material, pieces and components. Rules in 5 Languages: Italian, French, English, German and Spanish!

The game develops in 4 phases:

1 - The Adventurers must set all the Prisoners free, and each Prisoner will give them a piece of Amulet. The first Amulet on top of the pack of cards must be given, you cannot choose. The prisoner freed last will reveal to which element the Monster belongs and this time he will give a piece of Amulet with a sign contrary to that of the Monster, no longer a piece chosen at random.

2 - After freeing the last prisoner, add the remaining pieces of Amulet to the "Room" pack of cards, so that every player can complete his/her Amulet. You can attack the Monster only if you have 4 pieces of Amulet and after all the Prisoners have been set free. Re-shuffle the pack of "Room" cards and also the pack of the "Runes of Power".

3 - Chase the Monster and, if you are able to get it, give it a sound beating! The life points of the Monster are given according to the Monsters Table. It is not at all certain that you will be able to defeat it at the first attack. N.B. The Adventurer that defeats the Monster is teleported out of the Millenarocca, he is safe and he leaves the other players busy with phase 4 of the game.

4 - The Adventurers left must reach one of the exits and they must avoid perishing in the collapse of the Millenarocca.

Essentially, the winners are those able to come out of the Millenarocca.