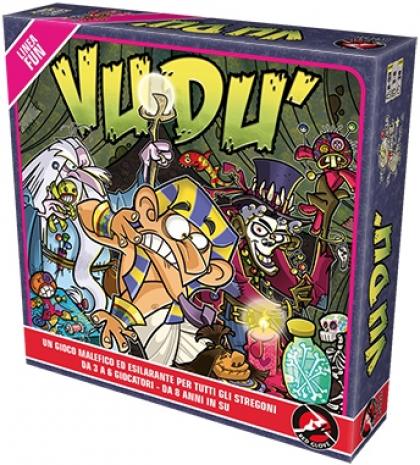 Ancient sorcery, dark omens and endless curses — you will become one of the adepts of the dark magic of the Egyptians or a follower of the ancient art of the Badly Dead Druids or an arcane sorcerer of Vudù rituals! Prepare yourselves for the biggest dispute of black magic ever. The Vudù tournament has just begun!

In Vudù, the players act as the most wicked and malicious sorcerers of all time, and they want to use their curses and black magic to make the lives of their enemies impossible to prevail over them! Each turn, you roll five dice, collect your ingredients, then choose whether to take new cards, take new items, or cast a spell. Each spell has a powerful and tricky curse attached to it that forces your target to play in a specific way, for example, talking with his tongue out for the rest of the game, or using only a single hand, or running around the table each turn. Each curse grants you points when you cast it and many more points if your target forgets to obey it or becomes too exhausted to continue. Collect as many malediction points as you can to reach the final tile of the scoreboard before anyone else!