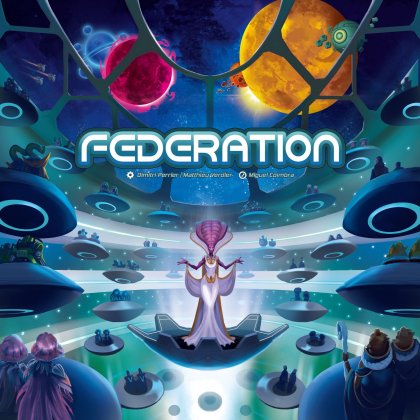 The universe is organized into many federations which trade, intrigue, develop&hellip;&#10;One of these federations, still not fully developed yet (5 member planets so far) wants a new delegation to join them, but you are not the only one having your sights set on the federation. The Federation challenges you to prove your worth for 5 years. During these 5 years, you must develop strategies, deploy tactics, take the best opportunities but also form the right alliances at the right time&hellip; In the end, only 1 delegation will be chosen: the one with the most prestige!&#10;&#10;Federation is an interactive Eurogame with innovative double-sided worker placement mechanic.&#10;&#10;The game lasts five rounds. On your turn you will perform simple actions but you will face multiple choices with different consequences. You will need to be a seasoned strategist as much as a tactician.&#10;During all the game, you will take your opponents&rsquo; progress into account to get ahead of them. The interaction between players will make you change your plan. &#10;Are you up to the challenge?&#10;&#10;DESCRIPTION AND KEY MECHANIC --- --- --- ---&#10;Each player has 4 double-sided Ambassadors. Each side (a Voting side and a Funding side) triggers different effects in the game.&#10;In the center of the main board, you will find the Senate, which is composed of 18 action spaces that you can activate with your Ambassador. The action spaces are located in different areas of the Senate: the right wing, the left wing, the floors, and the columns. Where you decide to place your Ambassador will have an impact on the prestige point you can score.&#10;Placing each Ambassador takes on a great importance and can lead to multiple consequences:&#10;1/ on which action will you place your Ambassador?&#10;2/ on which side? (Voting side or Funding side?)&#10;3/ in which wing?&#10;4/ on which floor?&#10;5/ in which column?&#10;&#10;HOW TO PLAY --- --- --- ---&#10;&#10;Federation is played over 5 rounds. &#10;Each round is divided into 2 main steps:&#10;&#10;I/ PLAYERS&rsquo;TURN: Ambassador Phase, where players take turns to perform their actions.&#10;A player&rsquo;s turn is divided into 2 successive actions:&#10;&#10;A. Play 1 Ambassador pawn (mandatory), place it on an available action space of the Senate, either on its Voting side or its Funding side, and perform the action of the space (main action).&#10;B. Send 1 spaceship (optional action) on an accessible special mission of your individual board if you have the required level of accreditation and perform the additional action.&#10;&#10;End of turn: Once you have performed a main action and potentially sent a spaceship on a special mission, it is the turn of the next player in clockwise order to play.&#10;When all players have played 4 turns (i.e. all players have placed their 4 Ambassador pawns), move on to the Executive phase (end of the round).&#10;&#10;II/ PHASE AT THE END OF THE ROUND: Executive Phase, where players receive their income, fund Major Projects and pass laws.&#10;&#10;At the end of each round, players perform the following 5 steps in sequence:&#10;1/ Each player receives the income of every production structure they built. &#10;2/ Each player pays the cost of their level of accreditation.&#10;3/ Move the marker of each Major Project one space forward for every Ambassador paws on its Funding side. &#10;4/ Determine the player with the highest voting power on each floor of the Senate (first, second and third floor). For each floor, the majority player scores as much PP as their level of accreditation.&#10;5/ Pass the law with the highest number of votes.&#10;&#10;END OF THE GAME: At the end of the 5th round, the game ends. &#10;Proceed to the following 3 final scoring:&#10;1/ MEDALS OF HONOR&#10;2/ REMAINING RESOURCES&#10;3/ FUNDED MAJOR PROJECTS&#10;The PLAYER with the most prestige points wins the game and joins the Federation. In case of a tie, the victory is shared.&#10;&#10;A FEW WORDS ABOUT ACTIONS SPACES --- --- --- ---&#10;The senate is composed of 18 action spaces that you can activate with the Ambassador pawn. &#10;The action spaces are:&#10;A. 5 Federated Planet Actions:&#10;&#10; Playing an Ambassador pawn on a Federated Planet action grants you an immediate effect.&#10; The Federated Planet actions increase your level of influence on the federated planets. &#10;&#10;&#10;The first player to reach the required level of influence immediately receives the medal of honor of the Federated Planet. Then, the next players must have a higher level of influence to receive the next medals. At the end of the game, you score prestige points according to the number of medal of honor you won.&#10;&#10;B. 6 Rooms of the Senate Actions (each one appearing once)&#10;&#10; Playing an Ambassador pawn on a Room of the Senate action grants you an immediate effect (Become first player and win a medal of honor, gain 2 degree of accreditation, buy 2 spaceship, recruit your Assistant die&hellip;)&#10; The Room of the Senate actions do not increase your level of influence on the federated planets.&#10;&#10;&#10;C. 1 Spy Action (Copy) (appearing twice, once in each wing of the Senate)&#10;The Spy action allows you to copy any Room of the Senate action (except for the President&rsquo;s office) or any Federated Planet action.&#10;&#10;Your individual board is composed of the 5 federated actions, 1 spy action, some senate actions and some special senate actions giving prestige points.&#10;&#10;&mdash;description from the publisher&#10;&#10;