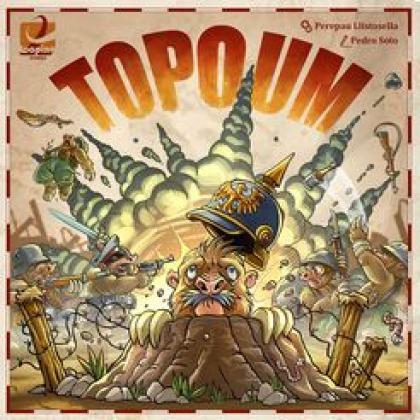 Descrizione tratta da Boardgamegeek:
1916, Europe: The Great War has ravaged the land. Only one fertile ground remains and it is strongly disputed...by moles?

In Topoum, you control an army of moles that are fighting for control of a piece of fertile land in the middle of the Great War. The moles are well known for their blindness and, for this reason, you'll earn badges (points) if you can form uninterrupted lines of sight between your soldiers.

Topoum features several different types of cards of four categories: combat, movement, expansion and special. Each game is different because you build the playing deck with seven types of cards (+110.000 combinations!).

Each player has a private hand with two cards and there is a public row of five cards available for all the players on the board. This is the structure of the turn:


Choose between "Enter the Battle with a Mole" (playing one card is mandatory) or "Move Moles in the Battlefield" (playing a card is optional for each mole).
Score the lines of sight between your moles.
Refill the cards in your hand and the public row.


When the "Peace" card (hidden at the bottom part of the deck) is drawn, the game ends. The players now score extra badges for majorities and sets of the categories of the cards they used during the battle.